In this month's publication of Entropiazine:
Eomon: Pheromone Reading Peaking Across Calypso
Building The Future: The next stage of Plot Ownership
ComPet: Approaching Open Beta

Current CDF readings of the Eomon pheromones are peaking across the northern continent of Eudoria leading in to the migration of Longtooth and Eomon. The annual Eomon migration period is here and the current CDF map of the migration pattern has been released. 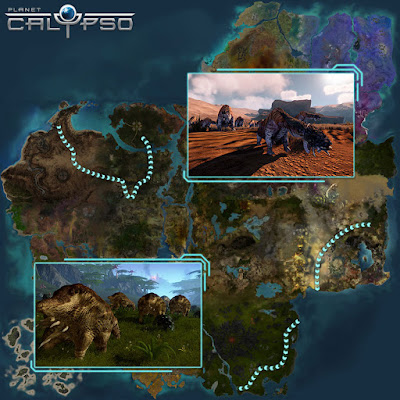 The data predicts that the Longtooth Migration Path will be slightly altered this year. Aside from these small changes, forecasts indicate that the Longtooth migration will continue as normal. The Eomons are the giants of Calypso. Their annual migration pattern on the continent of Eudoria has been recorded since at least 2005 but Xenobiologist's are yet to conclude further information about this event or the purpose of this migration.

The RDI Xenobiologist at the Minopolis Science tent is accepting Eomon Blood Samples in exchange for limited weapon amplifiers, to help in the further research the Eomons and the cause and effects of the migration process. New Iron, Bronze and Silver missions are now available for Eomon and Longtooth and can be found at Iron Mission Terminals at cities, settlements and outposts all around Planet Calypso.

This year Entropiazine will be tracking and reporting on the migration as it happens, visit http://entropiazine.blogspot.co.uk/p/migration-watch.html for the daily reports.

Building The Future: The next stage of Plot Ownership

Within the last 48 hours we have had an exciting development for the plot holders on Planet Calypso, information has been released on how the possibility to become virtual land developers and build their own centres of production and supply! 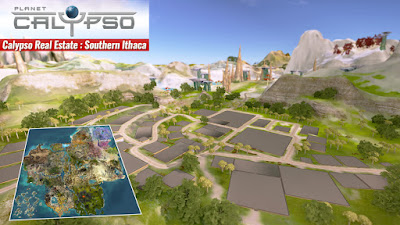 Construction:
The user interface will let you choose, preview and place your constructions on a grid. At this point you’ll be able to review all building costs. Once you’re totally happy you can proceed with the transaction, at which point you’ll be shown the construction time. Constructions are can be upgraded, outlying walls may boast elegant arches, gates and pillars, allowing you to modernise and improve your builds! Currently only one type of house is available, but this is merely the beginning.
You can also start again at any point by demolishing the building and regaining roughly 50% of your initial investment, which can then be used on your next build! 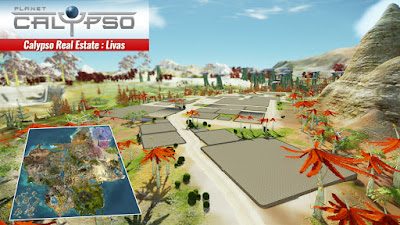 Grow Your Business:
Another feature to be added will be the possibility of creating a vegetable garden after building your house. This will enable you to become a producer of organic goods and a major player in the supply chain. You will literally be able to ‘grow’ your own business! 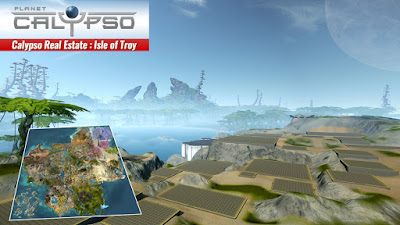 Village Development:
As a property owner you are also a citizen of a village and the development of village life will be the focus of future. Being a responsible village citizen will have a positive effect on the village community as a whole. This communal dimension will be a new aspect on planet Calypso.

We are now certainly reaching the end of the colonisation phase and even though Calypso will always be getting new colonists, we are now moving into the a whole new settlement and civilisation phase on Calypso. 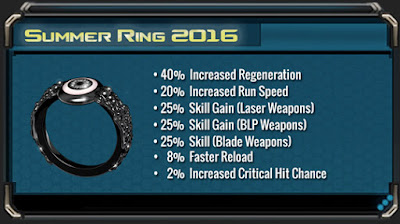 It is start of the summer time in Calypso, with the usual summer time hunting buzz and all new summer strong boxes available on the web store. The summer strongboxes contain the same as the classified strongboxes plus a few extra new rare rings will be available. Unique Rings will drop only once ever, so buy your Classified Strongbox at the Entropia Universe Webshop now!

Since the ComPet Closed Beta period began it has provided the ComPet development team with a wealth of valuable testing data and user feedback. This has resulted in significant improvements to the overall stability and game play of the ComPet experience.

ComPet is scheduled to transition to an extended open beta phase within a matter of weeks, with an eye toward further design and balance refinements, the further testing and polishing will be in preparation for the full release. This phase will be open to the general public meaning the system will no longer be wiped and transactions in the ComPet Shop will be open. There is still currently very little information about how this game will be linked to the pet system in Entropia, but I would assume that we will soon find out. 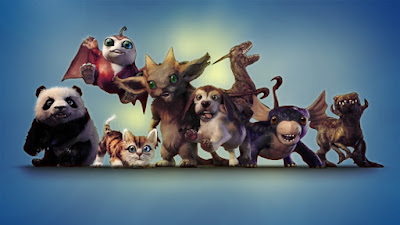 The product development and marketing budgets for ComPet were fully financed via ComPet deeds.
Unexpectedly is has been released that nearly all of the coding of the ComPet infrastructure and client was outsourced, meaning that MindArk’s developers have continued to focus on improving Entropia Universe threw this time, and acording to MindArk's press release the Entropia Universe and Calypso teams have even grown since the ComPet project began.

It would be expect that ComPet development will continue long after this phase, so expect the future of ComPet's to have a ton of new pet's lined upped in future releases.
Posted by Felix Zell Shallow at Friday, July 01, 2016 1 comment: