News: The Eomon And The Mul

The Colonial Xenobiological Institute has studied possible reasons for the Mul's behaviour for several seasons. The studies show that members of all Mul tribes assemble to take part in rituals. The purpose of the rituals is believed to be a rite of passage connected to the annual Eomon migration season.

The Mul mutants on Calypso aggressive behaviour during their seasonal rituals have been suggested to be connected to the rise of Eomon pheromones in the atmosphere. The Mulmun tribe in particular seem strongly affected by these pheromones.

The Eomon are the real giants of Calypso. Their annual migration across the continent of Eudoria, The north continent of Calypso was discovered years ago, but the Eomon's origins and the purpose of their migration currently remain a mystery.

The Mul tribes are actively attacking several settlements on the continent, this is usually seen as a precursor to the migration season.

The Calypso Defense Force are currently collecting intelligence on the development of Eomon and Longtooth activity on Eudoria, and have reported current Eomon pheromones levels at monitoring stations are currently low, but have been raising rapidly.

Peak pheromone activity have been detected at the Calypso Defence Force monitoring stations at Oseres, Nymphtown and Fort Ithaca.

The predators that follow in the wake of the mighty Eomon herd, are the Mul participating in their right of passage.

During the Migration period Longtooth also migrate across the continent of Eudoria, which are also a popular hunting target in this season.

The Eomon is an incredibly massive animal with four legs needed to support its own weight. A hard skin armor combined with its size is enough to keep most predators away, making this one of the largest herbivores on the planet.

The Longtooth is a form of Exarosaur that is very rarely seen on Calypso. Scientists from the Zoological Institute believe its appearance along with the migration season is somehow connected with the overall life cycle of the herd. This is as yet unconfirmed and the Longtooth remains a fascinating mystery.


Every Tuesday and Friday EntropiaZine will be releasing updates of the location of the Longtooth and the Eomon as we follow them threw their long voyage across the continent, click here to see the latest updates.

Posted by Felix Zell Shallow at Saturday, June 22, 2019 No comments:

The Mul mutants on Calypso aggressive behaviour during their seasonal rituals have been suggested to be connected to the rise of Eomon pheromones in the atmosphere by scientists at the Colonial Xenobiological Institute . The Mulmun tribe in particular seem strongly affected by the pheromones. 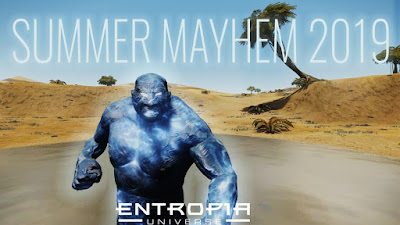 In order to determine which Entropians can defeat the Ascended Mulmun the fastest and win one of the Summer Mayhem prizes, a timer will start when entering the Mulmun ritual area in Assault mode.

In addition to getting the shortest Assault time, it is also possible to compete in Annihilation mode where the participants who gather the most points will win prizes.

Performance in Summer Mayhem Assault is time-based. The objective is to kill a special immobile Assault Mulmun Ascended boss creature as quickly as possible.

Also, the Assault Longtooth has a Dodge Chance buff that makes melee and MindForce weapons relatively more effective at dealing damage to it than traditional ranged weapons.

Upon killing the Assault Mulmun Ascended boss, the instance stops spawning new creatures and the participant’s time is recorded for the current category, if that time is shorter than any previous runs in that category.

Pay attention to both positive and negative buff effects inside the Summer Mayhem.

You can only have a recorded time in a single Assault category at a time. Recording a new score with a higher leader board rank (regardless of category) will replace any previously-recorded time.

Interact with the Pile of Skulls inside the Annihilation event instance to begin spawning creatures and start the mission timer; the timer pauses automatically when leaving the instance.

Eliminate Mayhem Mulmuns to accumulate as many points as possible in 10 hours.

Once your 10-hour run is complete, your score is finalised and recorded on the event leader board. You can then start a new run to try to improve upon your previously-recorded rank.

The score from a subsequent run is only recorded if it would result in a higher leader board rank.

You can only have a recorded score in a single category at a time. Recording a new score with a higher leaderboard rank (regardless of category) will replace any previously-recorded score.

The top ten highest scorers (most accumulated points) in each category win prizes.

Mayhem Assault and Mayhem Annihilation instances are accessed via the Global Events List from any planet in Entropia Universe.

In addition there are Mayhem Assault Training and Practice Annihilation areas. Browse the event list for the entrance appropriate for your avatar’s profession level.

The Colonial Xenobiological Institute and the Calypso Defense Force have issued a warning about increased Mul activity. The Mul mutants, Mulmun, Muluk-hir and Mulaak´f, are well known for their increased violent behaviour during this time of year.

The Colonial Xenobiological Institute has studied possible reasons for the Mul's behaviour for several seasons. The studies show that members of all Mul tribes assemble to take part in ritual dancing and brawling while becoming increasingly aggressive. The purpose of the rituals is believed to be a rite of passage connected to the annual migration season.

The Calypso Firearms Association has issued a number of Hunting Challenges for the Mul tribes, these are available from the Hunting Challenge Terminals. As the Mul's attack using their fists and feet, hunters are advised to enhance their armour with the corresponding plating types.

Jason Center:
Mulmun, All around Teleporter
Posted by Felix Zell Shallow at Saturday, June 22, 2019 No comments: