Over the last year further land developments for player housing have taken place with a number of new empty allotments ready for player to purchase popping up across Calypso. 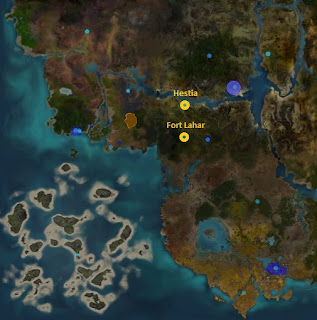 These new allotments are only obtained with the ownership of 9 or more Calypso Land Deeds, once claimed the Calypso Land Deed will display an (X) and will no longer be able claim again but will still continue to earn weekly revenues. Although most of the prime land areas are now taken.

In the development we say goodbye to Fort Isis as new teleporters appear. Roughly in the same area where Fort Isis used to exist we now see Fort Lahar, and to the north Hestia, one of the many allotted places reserved for player housing popping up around Calypso.

Earlier last year MindArk implemented a new dynamic event system, which has been used to create a number of Robot Invasion events on the planet Calypso, almost a year later we now we have seen the further implementation of this across Calypso...

The robot war continued to rage on with more aggressive attacks on outposts and forts. Attacking such locations as Fort Pandora and Fort Medusa. Just like the other Forts, Fort Lahar had a nearby robot spawn which triggers a pre-event after enough robots have been destroyed. 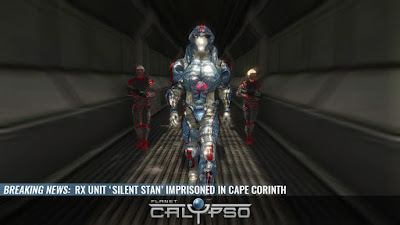 Currently the robots have been pushed back and now the CDF forces are interrogating an RX scout imprisoned at Cape Corinth to discover the locations of hidden RX Caches containing powerful technology.

The RX scout has been nicknamed 'Silent Stan' by CDF soldiers because of his strong resistance to interrogation. Currently Cape Corinth residents are deeply worried, fearing the capture will cause robot reprisals as the RX forces are gathering outside Cape Corinth and are preparing to attack the city!

The CDF suspect the RX forces are preparing to remove and re-conceal RX caches, in case 'Silent Stan' reveals their secret locations whilst under interrogation. Groups of RX are also gathering in desert areas surrounding Fort Medusa and Fort Pandora.

The CDF has asked citizens to help push back the attacks on Cape Corinth and continued aid in locating and retrieving the RX caches.

Over the last few months a number of Arkadia Underground Deed owners have noticed a massive rise in not only daily deed payouts but also market prices. No longer than 3 months ago deeds prices on the market was 60 PED, currently the market price is just dropping from a peak price of 90 PED. That is a 50% raise in less than 3 months. 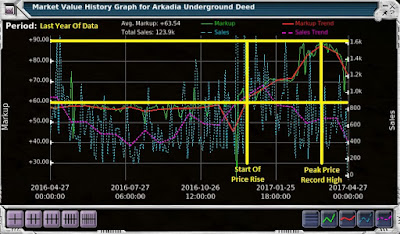 A number of sources have speculated this is down to new high markup treasure existing on Arkadia, which has led to a number of miners migrating to Arkadia, in which case I speculated that the deeds will not hold this new high prices for long as this new loot starts to dissipate into the public's hands, which the signs are already showing.

MindArk has announce a new system enabling Entropia Universe players to supply pets to ComPet players in return for PED will be available soon.

The first tradeable cross-platform pets will be ‘level-up pets’: pets that can only be used for leveling up existing pets in ComPet. ComPet players will be able to level up their pets faster using this method, so this will create a market for trained ‘level-up pets’ within Entropia Universe. 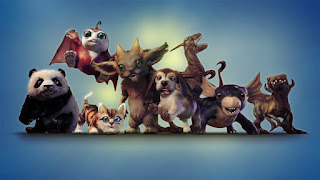 The ability to transfer ‘regular pets’ to and from ComPet will be introduced in future releases.

ComPet has now been fully released on Android, and is planned for release on iOS and Steam within the next few months. With huge anticipation a number of people are waiting on the first ComPet Deed payment, with no current indication of when the first payment will start and no current knowledge of the deeds paying daily, weekly or monthly.

MindArk has stated, "Entropia Universe is the primary product and focus of MindArk, and will continue to be so. In developing ComPet as an alternative gaming experience, MindArk has added an offering to complement and promote Entropia Universe. This is an effort that MindArk would like to continue, expanding and complementing Entropia Universe with new projects and experiences, thereby creating interesting and exciting growth opportunities in the upcoming year and beyond."

You have may have noticed a change in the font on your sticky notes as you type onto an older sticky note, this is due to an update in Entropia's font.

Even though this is just a small snippet of an update, it has huge implementations. While the old font still exists, the newer font (Arial Unicode MS) allows the support a wider range of characters and languages, such as Korean, Chinese, Japanese, Thai, Hindi, and more. This opens up Entropia to countries where the font was previously unsupported.

The Battle Simulator is for everyone and will be instantly accessible via the Entropia Universe event list under global instances. Players will compete under identical conditions, with standard skill levels and weapons/ammo which are applied upon entering the simulator. 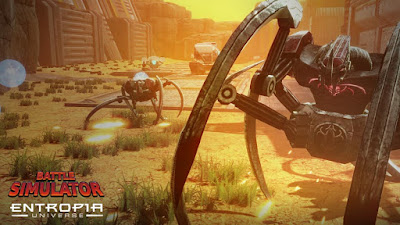 It is a stripped-down, old-fashioned arcade action assault course where finishing and getting the fastest time is all that counts. Only your reflexes and strategies will determine your place on the leader board and the prizes you win.

After testing the simulator myself, I can tell the simulator is still in its early phases and a few bugs exist, so I have come up with a few tips for anyone trying the battle simulator out to avoid bugs and have a better experience:


I wish good luck to everyone who takes part in the battle simulator!

MindArk officially announced that the Privatization of the Teleporter System will not go ahead in Entropia Universe. 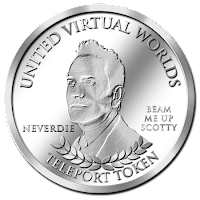 The MindArk management team has reviewed the proposal made by the President of Virtual Reality and owner of Rocktopia "John Jacob Neverdie" concerning teleporter fees, and has stated that such a system does not complement the current development plans for Entropia Universe and therefore will not be implemented.

However, the proposal was very interesting, and aspects of it may find their way into future planned systems and features where participants would be more receptive to optional fees that provide enhanced convenience and utility, although it is not states what this enhanced convenience could be.

This has made a lot of people sigh in relief as teleportation tokens will make it very hard for people to get about, especially traders who travel about to advertise wares and new exploring players with very little but a pack full of sweat.