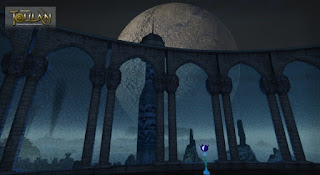 In the recent Toulan update, New Toulan Mirsal Token (TMT) which will be utilised for various activities and access to instances across the planet, the TMT at this time is used for access to the Qaydar, Baydar and Shamsdar mini instances, with more planned uses for it in the near future.

The New Mirsal Exchanger can be located standing at Nahar City Center, for exchanging sabikah into TMT depending on its value. New sabikah (Bullion) items, in different values (5 Gram , 10 Gram, 20 Gram) can be acquired through CUHOF instances.

The Card Parts Left/Right/Center are no longer available through loot, Maher who now provides Qaydar/Baydar/Shamsdar full cards, trading them for TMT. Salhoob has new dialog options to trade card parts for universal ammo.

These weapons are more than likely to be found hunting, it is unlikely, but because hardly any information is available, we can not rule out these weapons being crafted.

An overall step by step fix to Toulan's beginner experience has been applied. The new arrivals to the planet  now spawn in a better positioned and the starting area now has a wall preventing new players from wander off instead of following the beginner path.

The mission "Learning To Craft", involving Faiza and Mawlood, now has different requirements and the starter armour blueprint has been changed.

Vibrant sweat has been added to the recipe of the CUHOF Keys Blueprints and the CUHOF Instances exit spawn point is now better positioned to avoid getting stuck in the door.

Some missions have been updated and the Toulan team has suggested to abandon and re-take "Cold Cuts Research" (Sarhan standing to the West at Nahar City Center) and "Nahar Outfit Stage 1, 2 and 3" (Uthman standing at Nahar City Majlis).

Doing this will not clear the whole mission chain, only the mission you are on.
Posted by Felix Zell Shallow at Friday, March 22, 2019