The Colonial Xenobiological Institute has reported large herds of Snarksnot in several locations on the Eudoria continent, a number of reports of Snarksnots have been located near Cape Corinth, Camp Echidna, Fort Ithaca and the Nus Lull area. 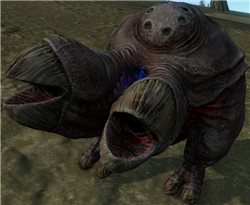 Scientists at the Colonial Xenobiological Institute are still speculating about what is causing the highly aggressive Snarksnots to once again gather in large numbers.

Many of the scientists that have studied older records kept by the Colonial Xenobiological Institute from last year have noticed a correlation very similar to this year and will continue further to investigate this abnormal seasonal phenomenon.

Rumors have also been circulating that the giant Schnozzle has been spotted in the large herds of Snarksnots. The Scnozzle is a much larger breed of the Snarksnot species, and is also a genetic relative to the snablesnot species.

Snarksnots are known for their devastating damage potential when threatened. They are heavily built, with loud calls that is common sound across the Eudorian continent. It is highly recommends hunters strengthen their armour with additional armour plating before attempting to hunt these beasts.

Posted by Felix Zell Shallow at Monday, October 21, 2019 No comments: