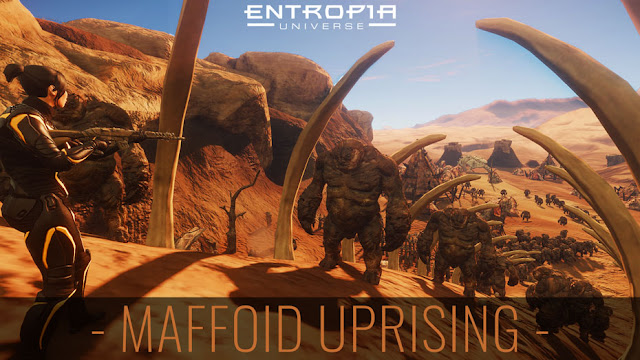 Once again the coming-of-age ritual of the Maffoids is upon us. The Calypso Defence Force is urging colonists to be extra careful over the coming weeks.

The Maffoids are a mega-mutant of the humanoid mutant subspecies. During this time of year only the most ferocious and ruthless Maffoids can rise to higher ranks among the tribe.

The Calypso Defence Force has sent out a warning to all colonists travelling close to Dust Keep Valley, Aegis Mound and Jason Centre to exercise caution due to the annual coming-of-age ritual of the local Maffoids tribes, where it is believed that the strongest Maffoid will soon gather.

There have also been reports of increased Maffoid activity near Camp Echidna and Cape Corinth, so be prepared and try to travel in groups in case of Maffoid attacks. Camp Icarus and Half Moon Bay have also experienced recent raids by small but aggressive packs of Maffoid Outrunners.

Colonists passing near these areas are advised to wear armour with impacts and cut protections if engagement is necessary.