The largest of the Longtooth appears near the end of the migration season after the heard have travelled across the vast continent of Eudoria on Calypso and consumed most of the vegetation in their wake. 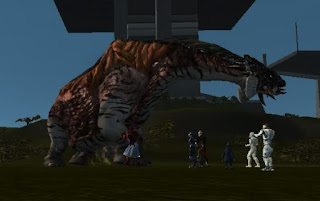 In honour of the death of the lovable former governor of Calypso Frederic Durren, it was decided that biggest, fattest of the Longtooth during each migration should be known as "Old Fred".

Durren loved joking, even at his own expense and it seemed to be most fitting way to honour him. Since his death, it has become a tradition among hunters, old and new alike, to hunt the "Old Fred" of the Longtooth every year.

For any intrested in taking part in this great yearly hunt, Old Fred currently can be located south west of Fort Ithaca, and the loot will be shared with anyone participating in the hunt regardless of teams.

As the migration season comes to an end, time is slowly running out to take part in this great hunting event.