Since then the Arkadia team have focused on content surrounding the moon, introducing quite a few extra hunting missions including a small expansion pack to the smuggler story line.

There is also new story driven content for Smugglers and for PTECH Industries. The Arkadia team has stated that this is only part 1 of 4, so many more missions are coming in the next update.

The smugglers have now opened one of their HQ's to members who joined their ranks and proved themselves. You will be required to discover an agent that is watching the movements of the cities but is hidden somewhere on the moon. They will tell you what you need to do get your access pass to enter HQ. Keeping in mind that this HQ is well hidden, only those who are worthy will be able to enter.

Once you gain access to the smugglers, you will be able to see the start of a complete new story line that will hint what they have been up to and require you to obtain a certain series items to be able to get the Smuggler Hazmat suit. This suit will be required for a deep undercover mission. Discover it and find out what lays ahead. There might be a backpack hidden in there somewhere, but it depends... if you answer correctly... Ned will be watching.

The communications on the moon have had some serious issues of tampering and weathering. PTECH needs your help in repairing the connection and discovering the issues. You will be required to report to the PTECH engineer located at the communication center in assisting them at discovering what might be the problem.

PTECH will also require you to assist in helping the repairs of the extractors but be warned, it might be a bit radioactive, but hey, nobody complains about extra body parts right?

Intel has shown that the Oratan have started to move around the bases and plan attacks that will happen randomly, so be prepared, their attacks are as savage as their nature

Whats coming in the next VU...

Firstly, the Arkadia team wants the members of the Imperial Federal Navy (IFN) to know that they will be working on the expansion of the story line, including missions that will take you to new locations and start working to smite the Smugglers. This will require your advancement in PVP skills. 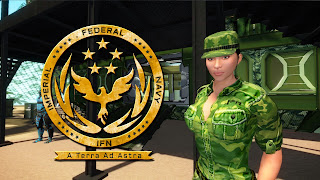 Currently the Arkadia team is working on a complete series of events that will be player driven and controlled. These events will include hidden passages, new lairs and new creatures.