A Report: The effect of events on supply and demands

As updates of the the migration was released today, the mighty Eomon Matriarch is the closest to Ashi as it going to get for this year before moving south, with the Eomon herd following behind, and as the migration goes on, I want to take a closer look at an example of how mass hunting in events has on the market value.

Currently in the migration Longtooth are easily the most accessible when it comes to hunting, the lower levels can be hunted by many of the new and old players alike, with the lowest level being the Longtooth adolescent at level 4. 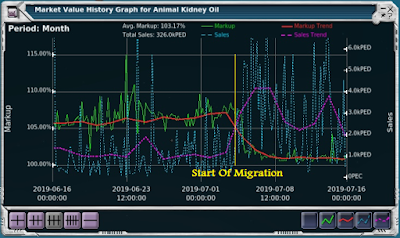 Animal Kidney Oil is one of the items that can be acquired frequently from the Longtooth. It does not need refining unlike hides, wools and skins and it more commonly used in crafting in its raw form.

At the start of the migration season we can easily see that the markup price falls drastically. The main reason for this drop is supply and demand, but there is a little more to this than meets the eye.

This happens when there is an oversupply of any resource, more supply means more people have that resources to sell, which means more competitors when selling. 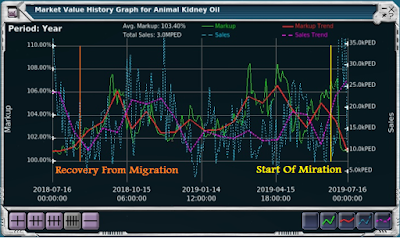 However, this does not mean that there is less demand for that resources, in fact the exact opposite, any smart person who crafts would use this the chance to buy the resource they need when the price is low, secondly, a trader who understand when there is an over supply of an item will buy when the price is low and hold onto it until the price returns to an average level again.

Many traders will use this chance to use their PED to buy into to low value resources, which tends to cause other markets to raise in markup, the demands from crafters will still be there, but with less of a supply, market prices tend to raise. An items with hardly any sales, does not necessarily mean there are hardly any buyers, it could just as equally be a hard to acquire item, and if so, the markup would be greater.